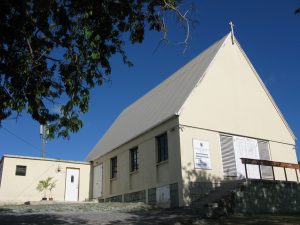 The Methodists and the Moravians started their mission in Antigua around the same time. So close was their relationship that at the time of establishment here, they agreed that they would not establish churches in the same villages.

The only exception to this arrangement was in the case of Liberta where they both established congregations– the Moravians at Spring Hill/Bailey Hill in 1773 and the Methodists at Zion Hill, now commonly known as Chapel Hill in 1850. This was mainly as a result of the large population of slaves from the various surrounding estates including Willis, Freeman’s, Bodkins, Burkes, Barrel-of-Beef, Patterson’s, Richmond’s and Bucks Horn.

At the abolition of slavery in 1834, the village of Liberta was formed as the slaves from all of the surrounding estates were the first to receive their freedom and in celebration they marched into the village shouting Liberta! Liberta! (the dialect for Liberty) thus coining the name by which the village became known. Many of the slaves remained on the estates and worked for a period of indenture on these plantations. The Methodist Church at Zion Hill was built to serve those freed slaves who did not want to walk from the village all the way to Spring Hill/Bailey Hill and it took its name from the village based on its centralized position in Liberta. To date it stands as a beacon on Zion Hill/Chapel Hill where it is clearly visible from almost all points of the village.

This first church was built of wood with galvanize roofing and consisted of two buildings, under one roof, situated one behind the other with the one at the back being used as the vestry. In order to get to the vestry, one had to go through the church itself.

There was a large tamarind tree in close proximity to the back of the church building that became home to a prominent bee hive and occasionally, members of the church would smoke out the bees and cut the honey that was produced in the hive. This honey was sold to villagers and some of the proceeds used to cover various church expenses.

In 1950, a severe hurricane devastated several of the wattle and daub houses in Liberta and the Methodist chapel was used as a temporary shelter for those persons in the immediate vicinity that had lost their houses in the storm.

In 1961, Rev. William James Barrett was the Circuit Superintendent and chairman of the District whilst Rev. Geoffrey Gordon was the pastor of Liberta Methodist Church. At that time, it became evident that the old church building had served its time as it was by then riddled with termites and the structure was weak and rotting. The building was therefore demolished and work commenced on the construction of a new chapel on the same site. Except for the very steep roof, the dimensions of the existing chapel were the same as the old one. The architect was Elaine Gooding.

During the period of construction, worship services were held in the Liberta Government School which by that time had relocated from Grace Hill to Barrel-of-Beef estate.

The pastor and members were very much involved in the construction process and worked closely with
the contractor, George James, as they visited the site daily to assist with carrying stones for the foundation, blocks for construction of the walls and water for the mixing of the concrete. The construction encountered a slight setback when one of the construction workers fell to the ground from the steep roof of the building. However, by God’s Grace, he did not suffer any broken bones and was soon well enough to continue work on the project.

The dedication of the new chapel was scheduled to take place in April 1962, but three days prior to its dedication, Rev. William Barrett fell ill and subsequently died on the day of the dedication. Hence, the dedication was postponed for two weeks after the burial of Rev. Barrett and the leadership of the church felt that the name “Barrett Memorial” Methodist Church was a fitting tribute, in honor of their fallen Superintendent. Rest rooms were eventually erected in the 1990’s when renovation work was carried out on the existing chapel.

Rev. Geoffrey Gordon became very busy right after the dedication, as the first Reception (Confirmation) in the new chapel took place on April 29, 1962 with five members including Bros. Everod Carter, Masrick Edwards and Eugene Joseph, and Sisters Yvonne Stevens and Jean Carter-Bedminster being received into the fellowship of the church. Three days later, on 2nd May, 1962 he conducted the first Marriage in the chapel between Sis. Annette Joseph-Bryan and Bro. Lissue Bryan Snr. Two babies were also baptized that year – Lissue Bryan Jr in May and Gordon Edwards in October.

Further, Rev. Dr. Albert Aymer who serves as President at Hood Theological Seminary at Salisbury, North Carolina, U.S.A. received his early training in the Liberta Methodist Church, prior to taking up residence in St. John’s and becoming a member of Ebenezer Methodist Church. He later candidated for the itinerant ministry of the church from that congregation.

The membership stands at 72 confirmed members. Additionally, there are many children and young people who are in regular attendance at worship services and play an integral part in the life of Barrett Memorial. Confirmation classes consisting of ten youths as well as an adult class of four persons are currently in training in preparation for confirmation.

Worship services are held at 9 a.m. each Lord’s Day. The church ministries include Bible Study and Prayer Meeting; Youth Fellowship which is led by Roxanne Knight, Church School with Renita Knight-Phillip as Superintendent, Cradle Roll Secretaries – Andrea Glasford-King, Renita Knight-Phillip and Maxine Browne; Children’s Choir directed by Andrea Glasford-King and Renita Knight-Phillip; Senior Choir, with Arlene Edwards as advisor; Men’s Chorus and Women’s Group. Mr Theodore R. Benjamin served as organist of the church from 1962 and continued intermittently for in excess of thirty (30) years. Mrs Adriane Donawa-Henry is the current organist and she has been serving in this position for in excess of ten (10) years. Melbert Matthews jr also provides musical accompaniment.

We thank God for the Christian witness of the Methodist Church in Liberta and declare, ‘To God Be the
Glory, Great things He has done!’